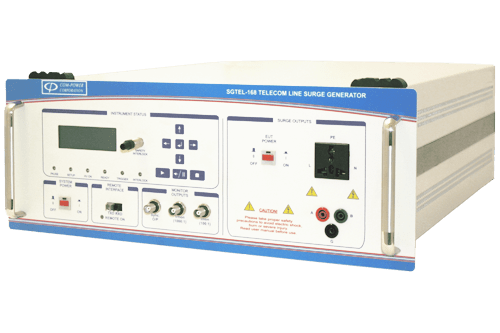 The SGTEL-168 is a versatile surge generator designed to simulate all the environmental surge transients as described in FCC TIA-968-B (formerly known as Part 68) and Industry Canada CS03 standard. It provides a single box solution Type A, Type B (metallic and longitudinal) and Powerline surges. These surges simulate the effect of lightning on telecom equipment under test. So it is also referred to as Lightning Simulator. The electromagnetic energy from the lightning couples into the equipment by powerline or telecom cable exposed to the lightning directly or indirectly. This model is an upgraded version of SG-168 with windows software control and a user friendly front panel for manual operation.